Although DPS has stated repeatedly (since 1995) in LTC instructor classes that the LTC “demonstration of proficiency” is NOT intended to teach beginners how to shoot a handgun, many (normally part-time) instructors continue to mix very inexperienced (and sometimes pure novice) shooters on the firing line with experienced shooters. Therefore, “shooting tests” in many range environments often creates anxiety for all participants, with many failures. As such, we offer the following approximately 1 ½ hour private class for only beginners.

“Shooting Tests” in many range environments often creates anxiety for all participants, with many failures. As such, we offer the following approximately 1 ½ hour private class only (beginner students on the range only) option for:

2. Apprehensive students who plan to take the LTC “classroom segment” at a distant location and want to have the shooting test “over with” so as to not be stressed out, embarrassed and/or endangered later.

3. Students who did not pass their shooting test on their first attempt elsewhere or did just barely “pass” the “shooting test” of a LTC course, are still “consciously incompetent” and would like to voluntarily participate again (with some coaching and practice first) in a less tense environment to improve their personal knowledge, skills and/or attitude.

4. Honest, realistic LTC instructors who want to refer some inexperienced students (with top portion of LTC-100 completed) to ACSD. **Please, no referrals of students who have been dismissed for safety rule violations and/or attitude!

This class includes:
* ACSD’s safety orientation (the first step towards learning about firearms)
* Use of Eye and Ear Protection (if student does not already have their own)
* One B-27 target for training/practice purposes and one B-27 target for CHL qualification
* Approximately 15 minutes of  “hands on” work in staging area with specific focus on fundamentals of marksmanship and “running the gun” with (preferably) student’s handgun and ACSD’s inert training rounds
* +$60 option to use a ACSD .38 revolver or 9mm semi and 100 rounds of ammo
*private range for coaching during 50 rounds of practice followed by a short break.
* Upon mutual agreement of “ready”, the student’s first official attempt on 50-round “demonstration of proficiency” (shooting test)
* Upon successful completion, instructor sign-off on bottom section of CHL-100 and follow up report to DPS of student’s PASS!

**DO NOT Purchase this course if you REQUIRE HANDGUN RENTAL**

There are no reviews yet.

Only logged in customers who have purchased this product may leave a review. 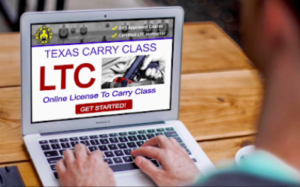