Sec. 411.172. ELIGIBILITY
(a) A person is eligible for a license to carry a handgun if the person:

(1) is a legal resident of this state for the six-month period preceding the date of application under this subchapter or is otherwise eligible for a license under Section 411.173(a);

(3) has not been convicted of a felony;

(5) is not a fugitive from justice for a felony or a Class A or Class B misdemeanor or equivalent offense;

(6) is not a chemically dependent person;

(7) is not incapable of exercising sound judgment with respect to the proper use and storage of a handgun;

(9) is fully qualified under applicable federal and state law to purchase a handgun;

(10) has not been finally determined to be delinquent in making a child support payment administered or collected by the attorney general;

(13) has not, in the 10 years preceding the date of application, been adjudicated as having engaged in delinquent conduct violating a penal law of the grade of felony; and

(14) has not made any material misrepresentation, or failed to disclose any material fact, in an application submitted pursuant to Section 411.174.

(b) For the purposes of this section, an offense under the laws of this state, another state, or the United States is:

(1) except as provided by Subsection (b-1), a felony if the offense, at the time the offense is committed:

(A) is designated by a law of this state as a felony;

(B) contains all the elements of an offense designated by a law of this state as a felony; or

(C) is punishable by confinement for one year or more in a penitentiary; and

(2) a Class A misdemeanor if the offense is not a felony and confinement in a jail other than a state jail felony facility is affixed as a possible punishment.

(b-1) An offense is not considered a felony for purposes of Subsection (b) if, at the time of a person’s application for a license to carry a handgun, the offense:

(1) is not designated by a law of this state as a felony; and

(2) does not contain all the elements of any offense designated by a law of this state as a felony.

(d) For purposes of Subsection (a)(7), a person is incapable of exercising sound judgment with respect to the proper use and storage of a handgun if the person:

(1) has been diagnosed by a licensed physician as suffering from a psychiatric disorder or condition that causes or is likely to cause substantial impairment in judgment, mood, perception, impulse control, or intellectual ability;

(2) suffers from a psychiatric disorder or condition described by Subdivision (1) that:

(A) is in remission but is reasonably likely to redevelop at a future time; or

(3) has been diagnosed by a licensed physician, determined by a review board or similar authority, or declared by a court to be incompetent to manage the person’s own affairs; or

(4) has entered in a criminal proceeding a plea of not guilty by reason of insanity.

(e) The following constitutes evidence that a person has a psychiatric disorder or condition described by Subsection (d)(1):

(4) diagnosis in the preceding five-year period by a licensed physician that the person is dependent on alcohol, a controlled substance, or a similar substance; or

(5) diagnosis at any time by a licensed physician that the person suffers or has suffered from a psychiatric disorder or condition consisting of or relating to:

(A) schizophrenia or delusional disorder;

(g) Notwithstanding Subsection (a)(2), a person who is at least 18 years of age but not yet 21 years of age is eligible for a license to carry a handgun if the person:

(2) was discharged under honorable conditions, if discharged from the United States armed forces, reserves, or national guard; and

(3) meets the other eligibility requirements of Subsection (a) except for the minimum age required by federal law to purchase a handgun.

(h) The issuance of a license to carry a handgun to a person eligible under Subsection (g) does not affect the person’s ability to purchase a handgun or ammunition under federal law.

Other Eligibility Questions
If I was convicted of Driving While Intoxicated (DWI), am I eligible for a Texas License to Carry a Handgun (LTC)?

DWI is classified as at least a Class B misdemeanor, and you are ineligible for a license for five years after a conviction for a Class A or Class B misdemeanor. For the purpose of determining eligibility, a conviction includes those that were dismissed after you completed probation or deferred adjudication.
If I received deferred adjudication for an offense, am I eligible for a Texas License to Carry a Handgun (LTC)?

Texas Government Code Chapter 411, Subchapter H states that deferred adjudication will be considered the same as a conviction. Depending on the type of offense and the date of the order of deferred adjudication, you may not be eligible for a LTC. See GC §411.171 and §411.1711
If I was arrested for a crime but the charges were dismissed, am I eligible for a Texas License to Carry a Handgun (LTC)?

If charges were dismissed without prosecution, then they are not disqualifying. A deferred adjudication is not a dismissal without prosecution and is considered a conviction for purposes of the LTC.
If I am delinquent in paying child support, am I eligible for a Texas License to Carry a Handgun (LTC)?

Texas Government Code Chapter 411, Subchapter H states an application for a LTC may be denied if the applicant has been finally determined to be delinquent in child support obligations.
Am I required to list all arrests on my application, even if the cases were dismissed or if I was found not guilty?

Yes. Applicants are required to report all arrests in order to ensure the background checks can be conducted timely. The application should include the year, the offense, the location and the final disposition. Copies of the dispositions will assist in the timely processing of your application. Applicants should also include information on cases that resulted in probation or deferred adjudication. Failure to provide any requested documentation could result in the termination of an application as incomplete. 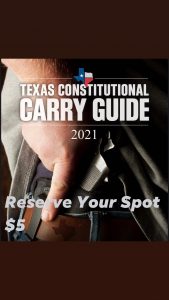 Attend Our Class for Only $5